Home Resources Articles The EU Bans Memes? What is Article…

The EU Bans Memes? What is Article 13? Over the past few months, the internet has found itself in a frenzy over the potential ban on memes, more formally known as “Article 13.”

So what is Article 13, what is its controversial sister provision (both members of the EU Copyright Directive family), and what do the people have to say about them?

Article 13 is the contentious “EU meme ban” provision of the recently-approved Copyright Directive — a piece of EU legislation aimed at honoring the ownership of content, but feared to be a means of stifling creativity, collaboration, and good old-fashioned fun on the internet.

The Copyright Directive (or Directive on Copyright in the Digital Single Market) is not just a possible ban on memes. It’s a comprehensive copyright and licensing directive, which sets overarching standards for the EU. It’s the responsibility of each EU member state to create their own laws in accordance with the directive.

This will be the first piece of legislation anywhere in the world clarifying the position of platforms as regards copyright and licensing.

Smith refers to the onus which the legislation places on platforms to regulate the upload and sharing of copyrighted content. For instance, the responsibility for ensuring copyright compliance on YouTube previously fell to content creators. Now — and for the first time in the EU under copyright law — that responsibility is shouldered by YouTube itself.

Article 13, itself, is just one of 24 provisions outlined in the Copyright Directive. It addresses the role of platforms and online sharing service providers (like Reddit, YouTube, or Google News) in ensuring that user-posted content featuring copyrighted material has express permission to be on that particular platform. The legislation, itself, states:

An online content sharing service provider shall therefore obtain an authorisation from the rightholders […], for instance by concluding a licensing agreement, in order to communicate or make available to the public works or other subject matter

As platforms cannot reasonably obtain licensing agreements from every single content owner (think every picture, video, clip, sound bite, song, etc. used online by someone other than the original producer), they will instead need to closely monitor user uploads.

Mass monitoring of this scale necessitates automated systems, likely in the form of upload filters. As it will be in the platforms’ interests to avoid violation fines and penalties, they’ll be motivated to create highly-effective filtering systems — but these systems may come at a cost.

This is Internet As Cable Television: millions of sites and services collapsed down to hundreds, each a mere distribution arm for media companies, with the public relegated to “viewer” status, unable even to communicate with one another.

The possibility that Doctorow alludes to is the one that’s garnered Article 13 the nickname, “meme ban.” User-generated content — like memes — are collaborative and responsive. They rely on the alteration and manipulation of previously-published content. Would need to be taken down by every platform, from Tumblr to Instagram, unless that platform had first obtained rights from Nickelodeon.

Article 13 isn’t the only provision of the Copyright Directive sparking controversy. Article 11, referred to as the “link tax,” requires platforms (such as Google News) to obtain licenses before publishing works from other news outlets. The fee that aggregate sites would need to pay individual publishers is what earns the name “link tax.” Of what material actually requires this licensing fee, the official language of Article 11 states:

…shall not apply in respect of uses of individual words or very short extracts of a press publication.

This exemption clause is notably vague, as “short extracts” has no further clarification or quantification. Most have interpreted it to mean that snippets and images from a news story are still subject to the link tax.

Google, itself, has interpreted this to be the effect of Article 11, and conducted a study to test what impact this could have on aggregate news platforms and independent publishers alike. Google’s test measured the user response to news stories shown on the search engine without accompanying images and snippets. The results found a 45% drop in traffic to the publishing news outlets.

Findings like this raise the question: Who exactly is Article 11 protecting?

2. When Does the Copyright Directive Take Effect?

The Copyright Directive reached a milestone on February 13th when the text was officially finalized in Trilogue agreements (the meeting of three EU governing bodies). Now that the directive has its official language, it will be voted on for a final time by the European Parliament between late March and mid-April.

If it is voted into effect, Article 23 of the Directive’s official text states,

In other words, Article 13 could be up and running as early as May of this year.

3. Why Does the Meme Ban Matter?

The Copyright Directive is just the latest in a growing list of laws coming out of the EU aimed at shaping the internet — and certainly the most contentious.

While the landslide data protection law, the GDPR, wasn’t without some controversy when it came into effect in May of 2018, it was generally viewed as a positive step in an ongoing effort to protect the privacy of internet users. Similarly, the proposed ePrivacy Regulation has been met largely with support, being seen as an attempt to protect the public rather than corporate interests.

However, the techlash in response to the meme ban and other provisions of the Copyright Directive has been overwhelmingly more negative than the public response to these other two digital protection laws.

The issue is that Article 13, unlike the GDPR and ePrivacy Regulation, doesn’t protect individuals — it silences them. It leads us to question at what point the laws and regulations meant to protect our rights in a digital world turn against us, filtering too much out of the internet.

Check out our What is GDPR? guide for a thorough introduction to the key concepts of this strict new privacy law.

4. How Have People Responded to Article 13?

Some say it’s the best way to protect creative content. Others say it’s downright censorship. And yet more say — just don’t take our memes. Let’s dive into what the response has been to Article 13, from those in favor to those opposed.

One of the most active voices in favor of Article 13, and the Copyright Directive as a whole, has been Parliament member, Axel Voss. Voss has often taken to Twitter to defend the Directive, with such tweets as: Outside of the political sphere, popular musicians have voiced their support for the Directive. James Blunt uploaded a video expressing why he advocates for Article 13. Blunt says:

I’ve been so lucky to be able to make music, but the next generation of artists coming through need to get a better deal when their music is used online.  I believe we need a world where the effort and creativity that goes into making music is rewarded fairly.

Along with Blunt, fellow artists, including David Guetta, have signed a petition launched back in 2016 in favor of the Copyright Directive.  While there is certainly support for Article 13 — especially from EU politicians — the voices in opposition are far more prevalent.

Nearly 5 million individuals have signed the petition to stop Article 13 which was started by saveyourinternet.eu — making it the largest petition in EU history.

Along with this petition, popular outlets such as YouTube have adopted the campaign, using the hashtag #SaveYourInternet. The user-dependent media platform tweeted this mockup of what could come of YouTube upon the institution of Article 13: 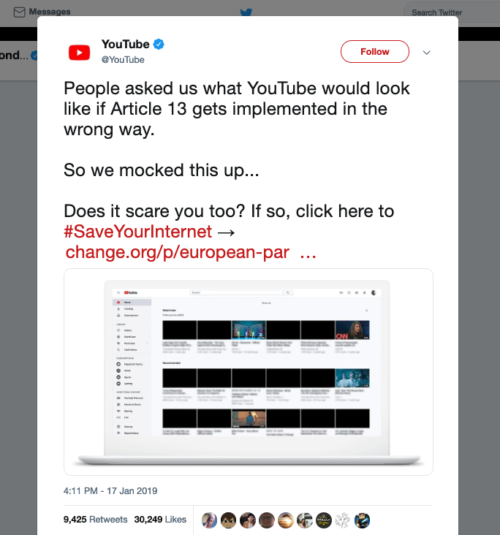 This legislation poses a threat to both your livelihood and your ability to share your voice with the world. And, if implemented as proposed, Article 13 threatens hundreds of thousands of jobs, European creators, businesses, artists and everyone they employ.

While YouTube has been one of the most vocal opponents to Article 13, there are plenty of voices outside of the entertainment sector with strong opinions.

The European Parliament is putting corporate profits over freedom of speech and abandoning long-standing principles that made the internet what it is today.

A demonstration protesting Article 13 was even arranged in Cologne, a campaign which resulted in a twitter trend throughout Germany: The response to Article 13 has even taken a meta twist, with users creating memes about the possible ban on memes:

These are far from the only responses we’ve seen to the EU Copyright Directive, and certainly not the last of them. A simple search of hashtags on Twitter, tags on Tumblr, threads on Reddit, or trending topics on Facebook will reveal just how much people care about Article 13.

The Copyright Directive has yet to be adopted in full, contingent on the March/April Parliamentary vote. Until then, people will continue to rally for and against it, urging members of Parliament to embrace the Directive — or toss it once and for all.

If come spring, the Copyright Directive does get the green light, the EU can expect to say goodbye to the internet as we know it.

KJ Dearie is a product specialist and privacy consultant for Termly, where she advises small business owners on how to comply with the latest data privacy laws and trends. She's been published in Business News Daily, Omnisend, ITProToday, MarTechExec, and more. More about the author