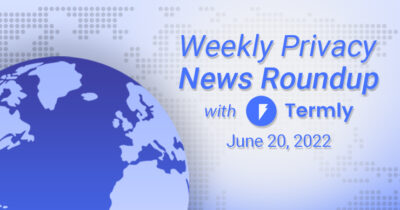 American Data Privacy and Protection Act gets a formal introduction

The American Data Privacy and Protection Act (ADPPA) was formally introduced by the  House Committee on Energy and Commerce and was scheduled for committee markup last June 23. The markup has been described as “another major step in putting people back in control of their data and strengthening our nation’s privacy and data security protections,” according to the joint statement released by Energy and Commerce Committee Chair Frank Pallone, D-N.J., Ranking Member Cathy McMorris Rodgers, R-Wash., and Subcommittee on Consumer Protection and Commerce leaders Jan Schakowsky, D-Ill., and Gus Bilirakis, R-Fla. As the legislative process goes through, input from significant stakeholders is also welcomed and encouraged by the leaders.

Google is working towards only keeping minimal customer data; this change is aimed at lessening the risk to the tech company in case of a cybersecurity incident. The retained data will be for legal requests and compliance with law enforcement agencies. According to their Chief Privacy Officer Keith Enright, CIPP/G, CIPP/US, the fragmentation of privacy, data protection, and data storage laws globally could create crucial obstacles to the customer privacy efforts of Google and may result in their services being inaccessible to some countries.

DuckDuckGo privacy claims are reasonable according to the BBB National Program

The National Advertising Division (NAD) of the Better Business Bureau (BBB) National Programs has settled that DuckDuckGo has provided a reasonable basis for its privacy protection claims but has suggested that the search engine has to define these protections for the consumers. DuckDuckGo’s claims that its mobile app and desktop extension are the “best, quickest and easiest step you can take for your privacy health” and that it doesn’t share customer personal data with third parties has been reviewed by the NAD. The BBB National Program has recommended that the company should clarify that the privacy protection of the app does include the use of search engines and outside apps.

Google gets fined by Russian court

Google faces a fine of 15 million rubles issued by Russia’s data protection authority, Roskomnadzor. The Magistrate’s Court of the Tagansky District of Moscow declared the penalty to the tech giant for repeatedly failing to localize Russian citizens’ data within the country. Previously Google has paid 3 million rubles for violation of localization requirement.