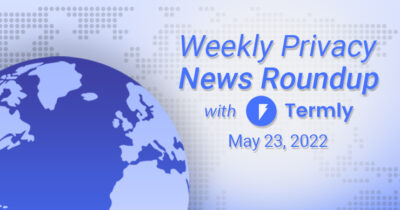 Tech industry groups stationed their lobbyist in states undertaking consumer privacy legislation. The action from big tech companies is due to their intention to influence the final bill from these states. During the passage of the Utah Consumer Privacy Act, 23 active lobbyists, most of them prominent in shaping the legislation in Utah. There are 445 lobbyists registered in 31 states that are considering privacy legislation.

Ahead of its beta release, Google announces the newest updates of its Privacy Sandbox for Android. Part of this is “Topics,” available as a developer trial. Also included are concepts such as First Locally-Executed Decision over Groups Experiment and Attribution Reporting, targetted for May or June. According to Google, the beta release will have key components of the Privacy Sandbox that will be released as mainline modules to Android devices.

The US Federal Trade Commission fined Twitter $150 million for using account security data for targeted advertising, in violation of a 2011 order. The FTC said Twitter asked for user phone numbers and email addresses to protect accounts, then allowed advertisers to use the data, affecting 140 million users. In addition to the fine, Twitter is banned from profiting from deceptively collected data, must notify users the data was misused, and implement and maintain a privacy and information security program.

The Roularta press group, which managed the cookies for two websites, faces a EUR 50,000 fine from Autorité de protection des données, the Belgian Data Protection Authority (DPA). The fine was issued due to the company not meeting the conditions for collecting user consent for the placement of cookies under the EU General Data Protection Regulation (GDPR).